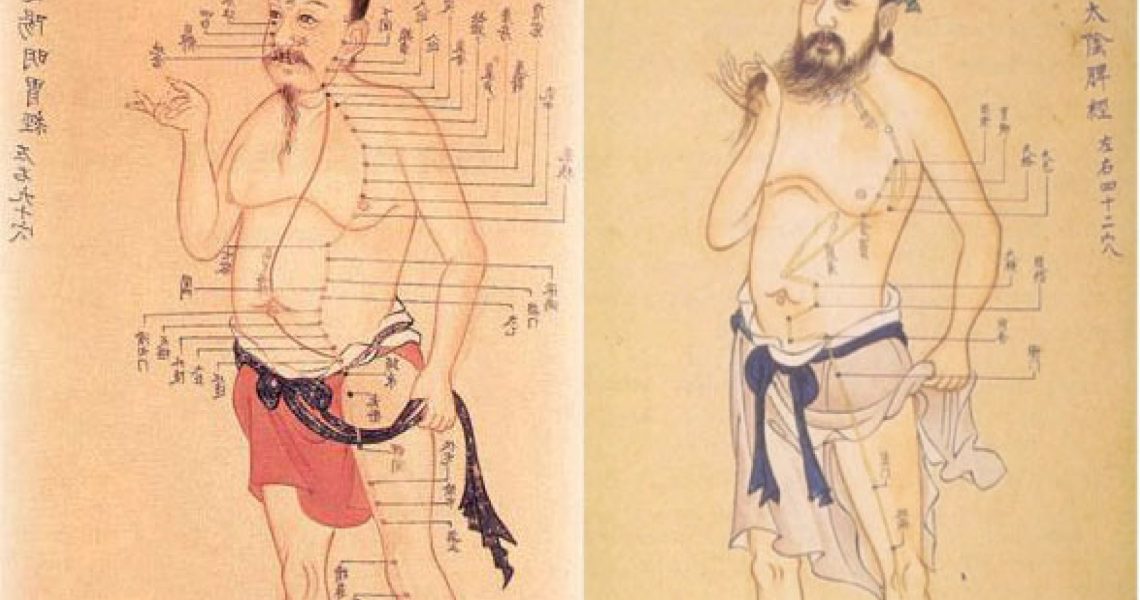 Acupuncture is simply the insertion of needles into the body at specific points to obtain a specific effect (usually therapeutic!).

Traditional Chinese Medicine (TCM), based in Taoist philosophy, views existence in terms of degrees of separation/division within a whole entity – the Tao, which is made of Qi (all energy/matter), which is constituted of Yin and Yang (negative and positive polarity), of which all things are expressions of various organizations and convolutions thereof. Further differentiated, the 5 elements are the phases of the expansion/contraction movement that is found in all things, and which are themselves different stages of the Yin/Yang interchange.

Each phase, having a corresponding movement (fully contracted and inert; expanding, accelerating and rising; fully expanded and dynamic; stable; contracting, slowing and descending), has a relative organ – that whose function in the body is most similar to the phase movement – and each organ has a network of related tissues and areas throughout the body (for example, see our friend at the top of the page), as developed through millions of years of evolution (aggregated effect of relationship between environment and organism stimulus and response).

Through millennia of observation of the effect of intervention on the body, through meditative and scientific practices, from the Chinese to the modern Chinese medical community, these relationships have been – and continue to be – mapped and explored, and it is using these relationships, investigated through detailed questioning, that acupuncture points (acupoints) are identified and chosen to address an individual’s set of symptoms, or to promote a certain function in the body and mind.

Ultimately, through accelerating what is too slow, easing what is too fast, shrinking what is too big and expanding what is too small, and all the while increasing the flow of oxygen- and nutrient-rich blood to affected areas of the body, the acupuncturist’s goal is to encourage the various composite parts of the patient to operate as a balanced single whole in harmony with its external environment, ensuring a healthful & peaceful internal environment and as such a happy, peaceful and content individual.